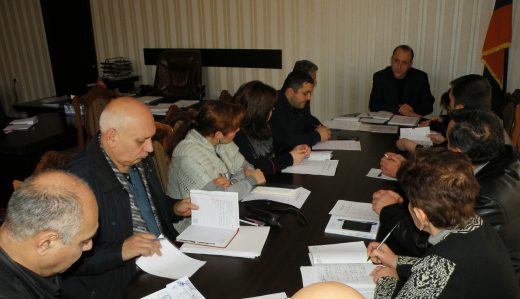 On the agenda were the attendance of the students during the first semester of 2018-2019 academic years, several current issues and the preparations for the mid-term exams of the same semester.

The Deans of four faculties of YSUIB and the Head of Part-time Learning Department reported on the attendance of students in the first semester of 2018-19 academic years.

In general, the lowest attendance was in the following courses of YSUIB Full-time learning: “Informatics and Applied Mathematics” IV and II, “Service” IV, “Theory of Economy” IV, “Economy” III and “History” III.

It was emphasized that the Educational-Methodical Department has done the necessary preparatory work to properly conduct the exam period. The branch faculties and Part-time learning departments have been provided with notebooks for mid-term examinations and paper forms for the tests were numerated and sealed. The presented schedules were checked and then a timetable was drawn to carry out the exam process in 4 classrooms equipped with cameras. A schedule has been drawn up for day-to-day oversight during the exam.

The Branch is ready to start the examination period.