The Department of English Language and Literature of the faculty of Humanities organized a seminar on “Colors and Color terms in Linguistics”, conducted by the Head of the Department, Ph.D., Associate Professor K. Harutyunyan, on March 23 of 2018. 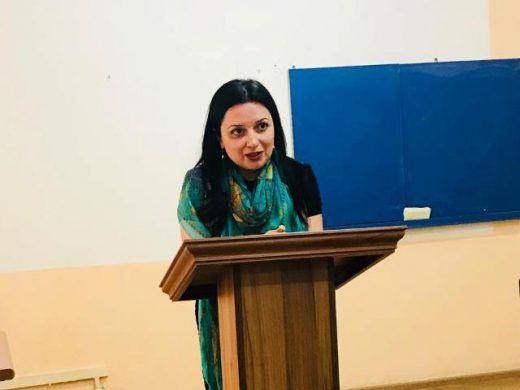 The seminar was attended by YSU IB professorial staff and students.

Within the theme, K. Harutyunyan presented colors and color interpretation in modern English and generally in culture, making a historical reference.

Speaking about color interpretation, the speaker mentioned that although colors were object of investigation of such science-related disciplines as chemistry and physics, color perception was different across cultures and individuals. It was emphasized that colors were under investigation of psychology, art, literary criticism, stylistics and so on.

The speaker drew parallels between Armenian, Russian and English, showing the similarities and differences in understanding and differentiation of the same color as the most important source of comparative study of language.

K. Harutyunyan at the same time proved a group of theoreticians’ research that the same color could cause different feelings among different people, and vice versa, different age and gender representatives could have different levels of color perception.

The whole seminar was in an engaging and interactive atmosphere, which once again highlighted the relevance and interest of the topic.

At the end of the seminar, the participants received a book on the same topic written by K. Harutyunyan.