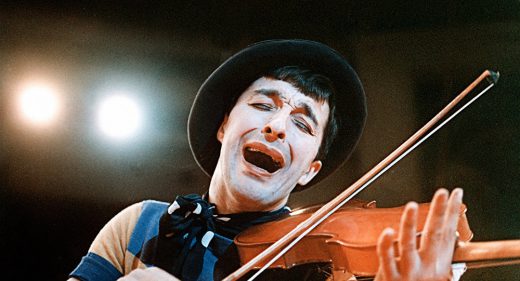 Although Leonid Engibaryan had a meteoric career that lasted only twelve years, the influence of Leonid Engibaryan (1935-1972) on modern clowning has been considerable. His untimely death also propelled him into the realm of show business legends, in the rarefied atmosphere shared by prematurely disappeared young artists who helped define a generation.

In the ring, Engibaryan’s character reflected his true off-stage persona: A fiercely independent young man, mischievous, belligerent, in constant revolt against the powers that be—whether the ringmaster in the circus ring, or SoyuzGosTsirk, the central Soviet circus organization, in real life. In this, he embodied the moods of a new Soviet youth, which danced the twist, listened to the Beatles, and tried to erase three decades of Stalinist tyranny.

Leonid Engibaryan, ‘the clown with sad eyes’, revolutionized the art of clownery by introducing lyrical tones into traditional buffoonery and grotesque sequences. According to the Spectacle journal,

“he has shown the direction. He was the innovator. He began to do clown gags that were not funny, but very sad. They ended sadly. He felt that life was not funny anymore”.